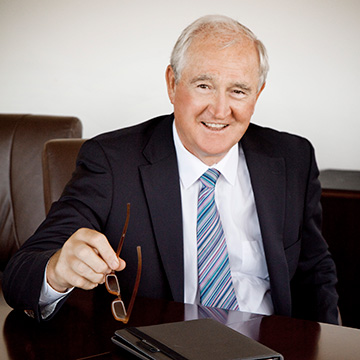 Eddie assumed the role of Executive Chairman of Mainstream Renewable Power in September 2017 following nine years as Chief Executive Officer of the company he founded in 2008.  He is a world renowned entrepreneur and leader in renewable energy.   Previously Eddie completed ten years as Chief Executive of global renewable energy company Airtricity which he founded in 1997. Airtricity was sold in 2008 to E.on and Scottish & Southern Energy (SSE) for €1.8 billion.

Eddie has been named World Energy Policy Leader by Scientific American magazine and Oilprice.com cited him as one of the five most influential figures in the US clean energy sector.  He was presented with the Leadership award at the annual Ernst & Young Global Renewable Energy Awards and in 2013 he received wind energy’s most prestigious award, the Poul La Cour Prize from the European Wind Energy Association in recognition of his work in the sector.  In May 2016, Eddie was appointed as the Global Wind Energy Council’s (GWEC) new Global Ambassador.

From 1987 to 1996 Eddie was Chief Executive of Bord na Mona, the Irish Peat Board, where he took the company from loss to profit making and it was here that he began to develop his vision for wind power. He built Ireland’s first commercial wind farm at Bellacorick, Co. Mayo with an installed capacity of 6.45MW twenty-five years ago and it is still producing electricity today.

He holds a Bachelor of Chemical Engineering and a Masters in Industrial Engineering and has a doctorate in Business Administration from the International Management Centres, Europe. He has received an honorary Doctorate of Science from University College Dublin (UCD), an honorary Doctorate from NUI Maynooth and most recently he was awarded Doctor of Science, honoris causa, from the University of Hull in recognition of his major contributions to business and science.